Astronaut Lairs are randomly generated map features. The walls are lined with a strip of Polymer blocks down the middle of each wall. Main shafts are usually 15 to 20 blocks deep. The only Mob that spawns in the lairs are Astronauts. It is common that they will fall down more randomly generated holes in the lair. Occasionally other Mobs will fall into lairs, where they are killed by Astronauts or become trapped. It is very uncommon, but possible, to find 'abandoned' lairs or lairs generated into Chasms (chasms cannot be found in latest version of game) .

When creating your moon, the Cave Frequency setting seems to have a minor effect on the generation of Astronaut Layers; however, even when it is set to maximum, they are still rare and on average tend to appear every 5km.

The layouts of the underground lairs can range from extremely simple to outlandishly complex. Simple lairs may only consist of a single main shaft. Complex lairs will have a main shaft, one or more hallways, and one or more interior shafts.

Main shaft horizontal dimensions are typically 7x7 blocks. The depth of the shaft will vary from lair to lair. The main shaft is usually, but not always, open to the surface of your moon. Interior shafts can be 5x5 or 3x3 with varying depths. Interior shafts can extend down, up or horizontally in any direction. The ceiling and floor of a shaft will usually have one polymer block embedded at the center. A shaft's plan dimensions are always square with an odd number of blocks on each side.

Hallways also have square cross-sections. A strip of polymer blocks will be embedded along the middle of each wall, floor and ceiling. Hallways connected to the main shaft are usually 5 blocks tall x 5 blocks wide. Additional hallway branches are usually 3x3. There are shafts at the end of some hallways, other hallways are dead ends.

Lighting can be bright in some lairs or almost non-existent in others. If you plan on exploring a lair it is a good idea to bring a light source with you, because the lairs are often poorly lit. 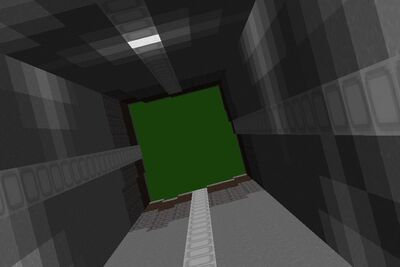 View from inside the main entrance of an astronaut lair.

Lairs can be entirely underground, with no openings to the outside world. 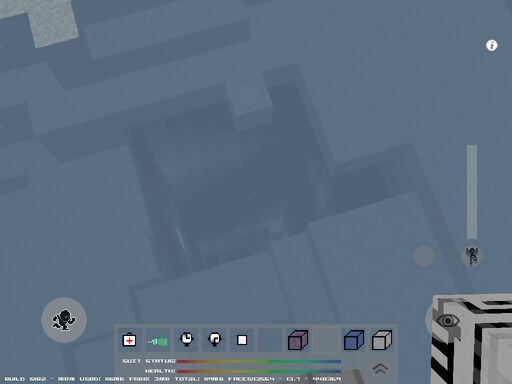 Two lairs can be generated near each other, and if their corridors meet, they will usually be oddly aligned. 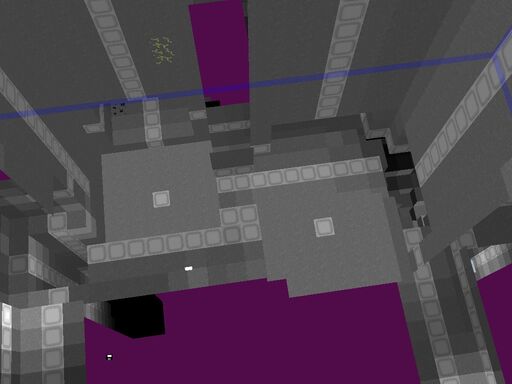 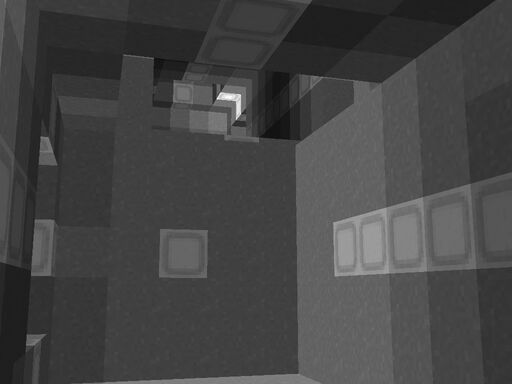 Rarely, when a lair is generated near the edge of a 128x128 map block, an interior hallway will not fit the standard 3x3 or 5x5 dimensions. 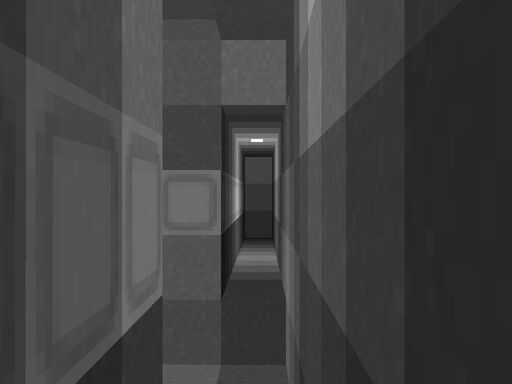 Part of an astronaut lair that runs against a 128-block boundary. There is a pair of 1x3 hallways instead of the normal 3x3.

Astronauts in a lair, seen using the transparency Cheat.
Community content is available under CC-BY-SA unless otherwise noted.
Advertisement