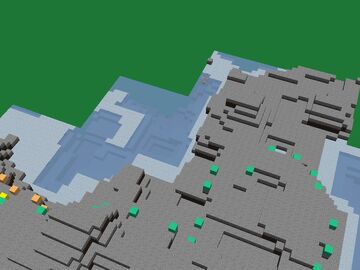 A chunk, also known as a renderblock, is a 16x16 section of the game data or "map," similar to Chunks in Minecraft. Lunacraft stores pieces of the map in separate files for each 128x128 Superblock, but for drawing on the screen ("rendering") it breaks the map up into smaller 16x16 pieces.

As you move around the moon, bits of the map that are getting closer are shown on the screen in 16x16 pieces. If you move quickly enough, the game can fall behind and you might see something like this:

If you change the View Distance setting in the Options, it affects how many chunks are displayed.

There are a number of bugs in how Lunacraft does lighting (particularly in Update 1.8) that show up on chunk boundaries. Here is an example:

When these bugs happen, the "edge" of the oddly lit area is always along the boundary of a 16x16 chunk.

The Transparency Cheat does not depend on chunks. However, sometimes while drilling one will encounter transparent surfaces where there should be solid blocks:

These transparent surfaces always occur at the edges of 16x16 chunks.