The turret is an automatic defensive block, that shoots enemy Astronauts and Mobs, including brown mobs and small green mobs. Surrounding your base with these is a good idea if you are vulnerable.

You can destroy turrets by shooting at them. However, once they are shot, they will begin to attack you unforgivingly. They will not become a spinning entity when destroyed. It is assumed turrets will play a bigger role when/if multiplayer is introduced.

The player (and possibly other Mobs) cannot occupy the space very close to, or immediately above, a turret. 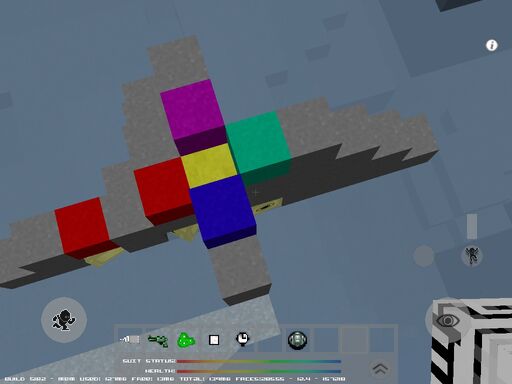 In this photo, three turrets have been placed on the ground and a variety of blocks have been built up around them (plus stairs and platforms to get to the colored areas).

The yellow block, which is not directly above a turret, also excludes the player. If the player approaches this block from the purple side, he will end up "inside" the blue block. He can get out by moving further away from the yellow and into the adjacent empty space.

However, if the player approaches the yellow block from the blue block, he will be trapped inside the purple block (which has a plain Rock block next to it), and then cannot escape except by drilling himself out or jumping.