This article describes how I corral and transfer Astronauts from one place to another. There is a related article on Mob Wrangling.

Any open pit deeper than about 6 blocks deep and with no tunnel exits will hold all 5 types of astronauts almost indefinitely. 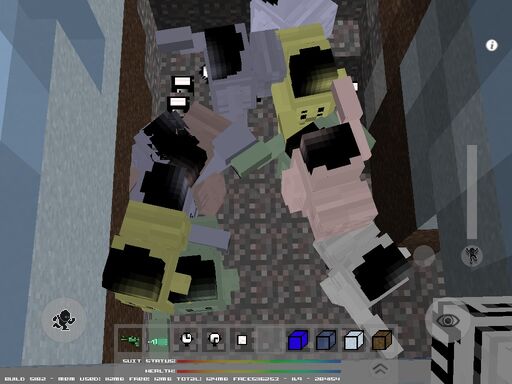 Although astronauts of the different colors often fight one another, they also can peacefully coexist with one another. It seems that about half of the astronauts that enter a pit like this will be shot by another astronaut shortly after entering the pit. After a while the shooting stops and any remaining astronauts then remain indefinitely.

Pits like this also catch most of the other types of Mobs.

For one big project, described here I ended up with about 25-30 astronauts and two giraffes in the same pit: 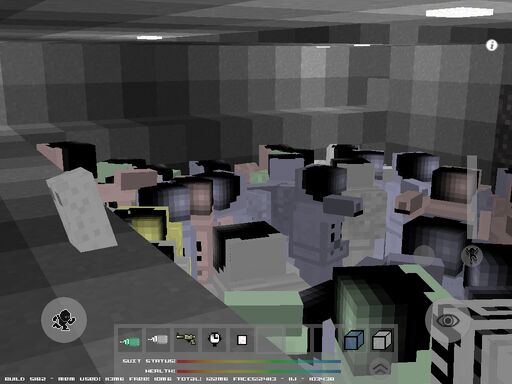 I added several ramps, platforms and access corridors to facilitate taking photos and watching the party: 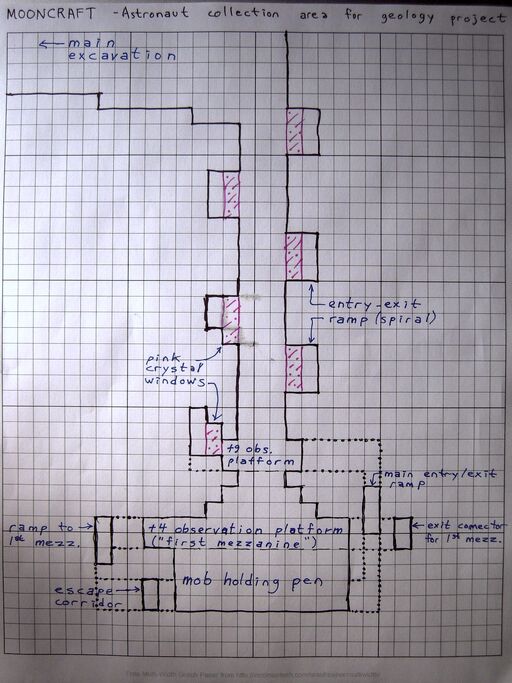 Cross-section of the holding pen, with observation levels, connecting corridors and entry-exit ramps

Lately I have started evaluating how many blocks you really need to wall in Astronauts. For this purpose I built a larger astronaut pit with several internal sections: 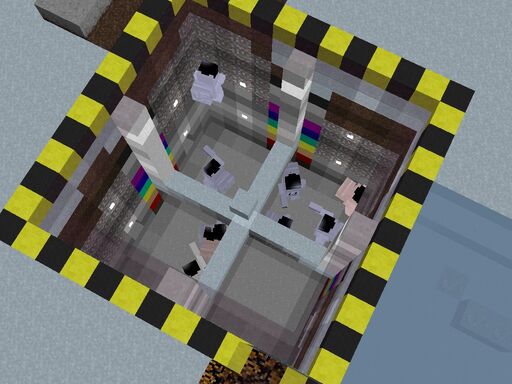 I configure the walls as desired (different block heights, gaps in the bottom, etc), then wait while watching from a high vantage point.

In these tests it is easy to spot astronauts trying to climb the walls. In the photo, the powder-blue astronaut near the very top of the photo is climbing the back wall. He has gone up about 3 or 4 blocks. I watched one of these climb up one block at a time, then turn and jump. They are usually facing towards the pit and land in the same sector they started in.

Here is another example, close up: 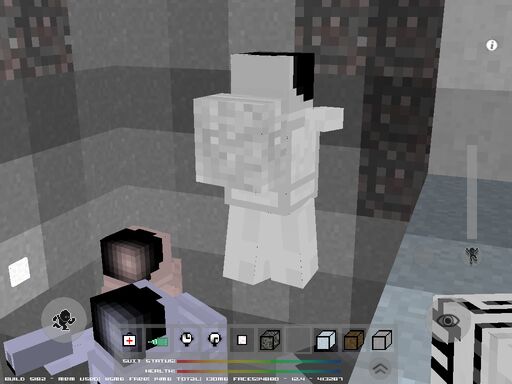 I have also seen them jump across the sector barriers (the lower partial-walls) through a similar method of climbing, turning and jumping. If I just sit and let the game run (or if I do other things and come back later), an astronaut will switch quadrants about once an hour.

Because they can climb walls this way, just to be safe I now make sure all open-air astronaut pits have a one-block inward overhang at the top of the walls. I used Rubelite for the one shown above, and you can see part of one astronaut is partly behind the Rubelite.

The main question answered by this test is that a two-block wall that is 3 blocks above the ground will hold astronauts indefinitely, unless they have a place to climb up onto from which they can jump over. The 3-block gap under the wall is high enough for the player to walk through, and also seems to give the astronauts no place to hold onto for climbing.

If the wall is a single block high and 3 blocks off the ground, the astronaut can jump and land right on top of it.

Any astronaut can move freely in a tunnel that is 4 blocks high and one block wide. 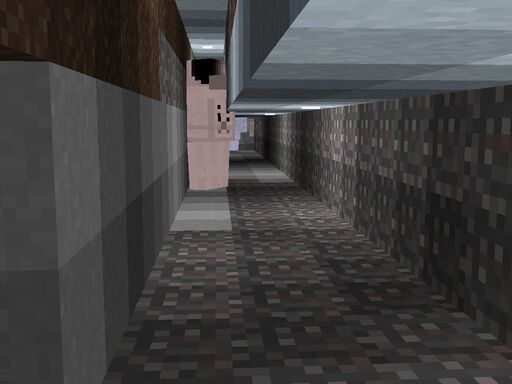 An astronaut in a transfer corridor

Next to the 4-block-high tunnel you should also make a normal 2-block high tunnel for yourself, two blocks wide as shown in the photo.

You can limit the astronaut's movement by blocking its corridor. I use a block on the floor and another on top of that (occupying the bottom two of the 4-block tunnel height).

In one area I have a set of branching 4-block-high tunnels leading to separate holding pits for each color astronaut: 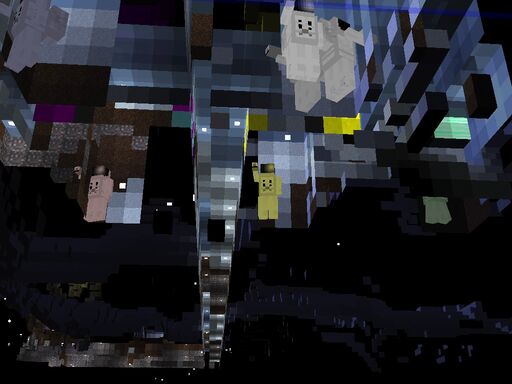 The Transparency cheat provides a unique perspective on an astronaut sorting and holding system.

Here I have a branching network of transfer corridors like the one shown above. The corridors connect several Brown_Mob pits to the north (left of the photo) to the color-coded holding pens. The astronaut corridors (4 blocks high) each have a 2-block high corridor for me, and these cross each other in many places. The astronauts never go into my corridors because they just don't fit.

Just to the south is this Astronaut lair: 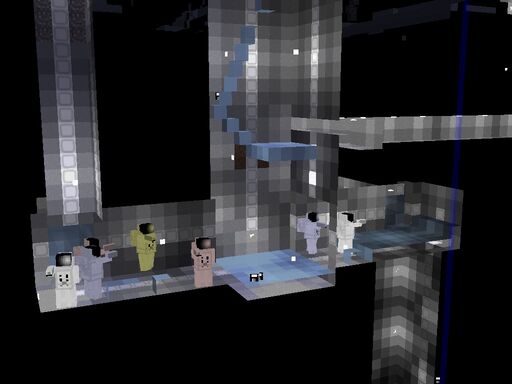 An Astronaut lair that has been partly sealed, holding astronauts ready for sorting.

When I found this lair, all of the astronauts pictured were at the bottom of the deep shaft in the lower-right. I stumbled into the lair while trying to quarry a giraffe, then entered it via the small connecting corridor seen in the upper-right. I sealed off the 3x3 horizontal dead-ends with ice, then brought the astronauts up to the main level by slowly adding blocks of ice to the bottom of the deep shaft, lifting the astronauts up one layer at a time. I am leaving them here until I work out a good way to raise them the rest of the way to my sorting corridors. 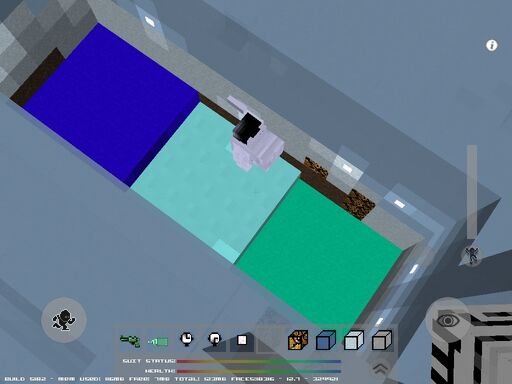 When the astronaut is on the middle cyan level (as pictured) he can either go up (to the blue) or down (to the green). He turns, moves forward, and jumps, all in a random pattern. In particular he'll jump regardless of whether it's actually appropriate to jump; and when he moves forward and falls down to a lower level he hardly ever turns around to jump back up. Because of these movement patterns, he is much more likely to go down to the green than up to the blue.

Once in the green, the only way he gets back up to the cyan is if he jumps when he is near the edge of the cyan and facing towards it.

Because of this, in any multi-level terrain like this test pit, the astronauts will almost always be in the lowest level. If I watch this astronaut for a long period of time, he will spend:

About 3/4 of the time in the green (lowest) level,

Thus, if you have a pit full of astronauts and want to get most of them to move to one side of the pit, simply mine out the floor of the pit so that part of it is one block deeper. (Or alternately, place blocks to raise part of the floor). After a brief period, 3/4 of the astronauts will be in the lower part.

During the excavation for my Geology article I discovered a great way to capture astronauts. Due to the fact that astronauts move down steps much more easily than they move up, a huge "open-pit mine" shaped hole makes a great passive trap: 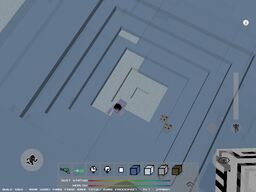 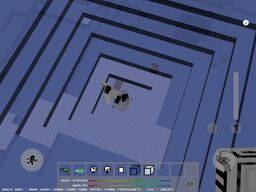 Shortly after digging the pit; the (slightly enlarged) pit an hour or so later

Astronauts are often trapped "in the wild" by similar "open pits" formed by the terrain: 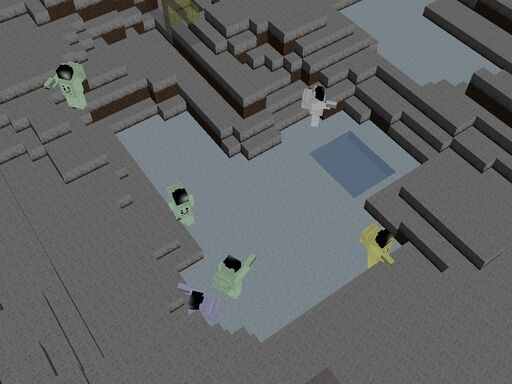 The corridor and barrier dimensions (4 blocks high and two blocks for a barrier) also apply in rooms of arbitrary size. 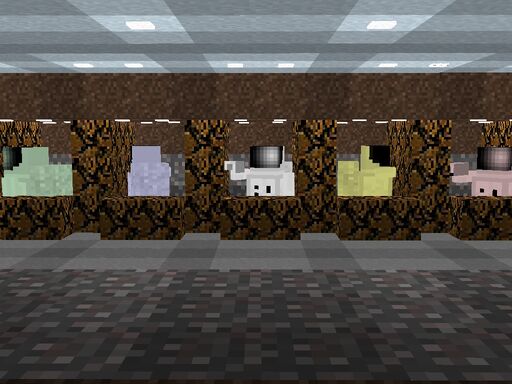 This picture shows a "stable" with 5 "stalls" containing one of each of the 5 colors of astronauts. Each pen is 4 blocks high. For my convenience, the floor of each stall is one block lower than the main floor you see here.

After I got 5 astronauts (one of each color) in the stalls, I was able to shuffle the colors around by swapping pairs. For example, I swapped the yellow and white astronauts by temporarily removing the wall separating them, then putting the wall back after they had switched places. Having the floor inside each stall one block lower than "my" floor makes this easier.