After creating the mapping program described in my article User_blog:Mrob27/Internal_Data_Format, I began to compute statistics of the relative abundances of the various materials that the moon is made up of.

Here is a sample of the statistics I found, showing two different "sectors" (128x128 map parts) of a brand-new untouched moon I created for the data format article:

(For more statistics and analysis, see the separate article User_blog:Mrob27/Relative_Abundances_of_Materials)

By comparing the "sector1" and "sector2" numbers, you can see that the amounts of different materials vary a lot from one area to another. The block type (BT) in this list is the actual number found in the map data, which distinguishes the two different types of Dirt. The numbers here are all one number higher than the blocktypes in items.txt, so for example Aluminum ore is 11 here, but is 10 in items.txt.

But the really bizarre thing is the last item, block type "130". I found this in three (out of nine) sectors of the map data in this world, all of them buried a significant distance underground: 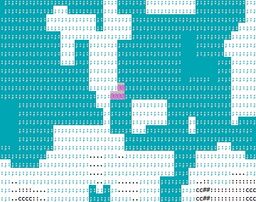 So I set out across the wilderness to locate this rare mineral. First I located the site of the block type 130 deposit, and marked it with Amethyst Ore: 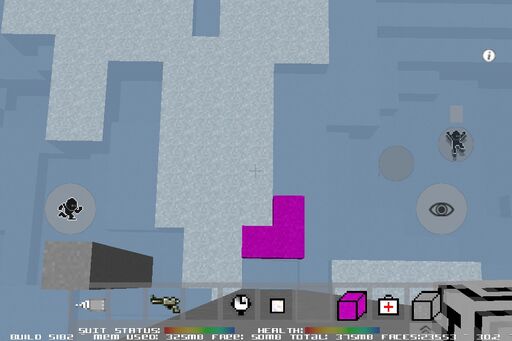 I mined down to it and cleared out a room around it: 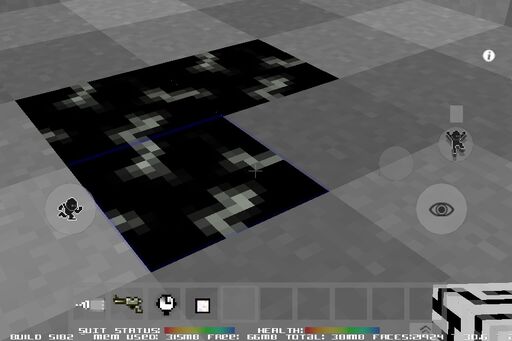 When one of these blocks is mined, a Disk is added to the inventory: 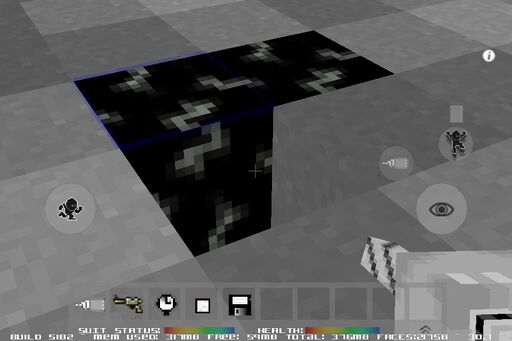 Scanning this new disk shows it is item "disk8" (blocktype 129 in items.txt) which is described as "TYPE: Data / Contents: Refine minerals to build useful items.": 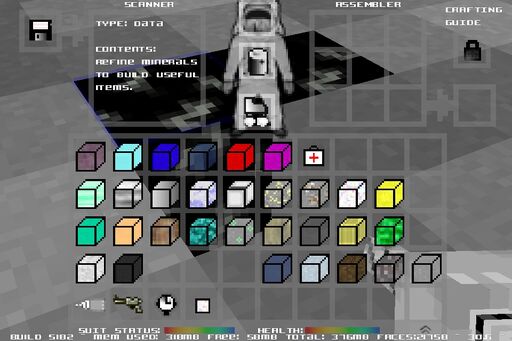 The newly-exposed (east-facing) side of one of the remaining block-130s looks different from the top. Here are photos (from another deposit of block-130) showing what all 6 sides look like: 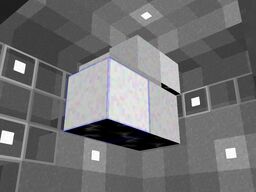 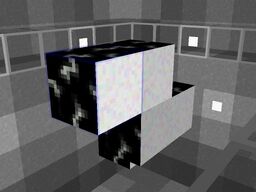 If you mine it from far enough away to get a floating block (the little spinning block that has been mined but not yet picked up), it looks like Molybdenum on the top, bottom and two sides and like Aluminum on the other two sides. 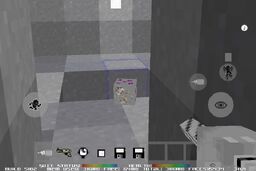 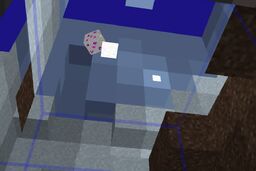 Also in the photo you see two disks in the inventory. Each block, when mined, gives you another disk, and they all scan the same.

User:Scooter8pie, who has excavated more rock than most everyone else put together (while pursuing alchemy, see his article User_blog:Scooter8pie/Alchemy_and_the_Brown_Mob) found this block while doing normal exploring (without the aid of maps). He found most of them on the surface, not underground.

I think the fact that it is found on the surface makes it more likely that these blocks are not a bug, but are perhaps left over from a time that the game designers wanted to give the player some Disks without the need to kill Astronauts. The disk you get has a fairly general, beginner-type hint, almost as noob-worthy as the "split items with multi-touch" hint you get from the disk the game gives you.